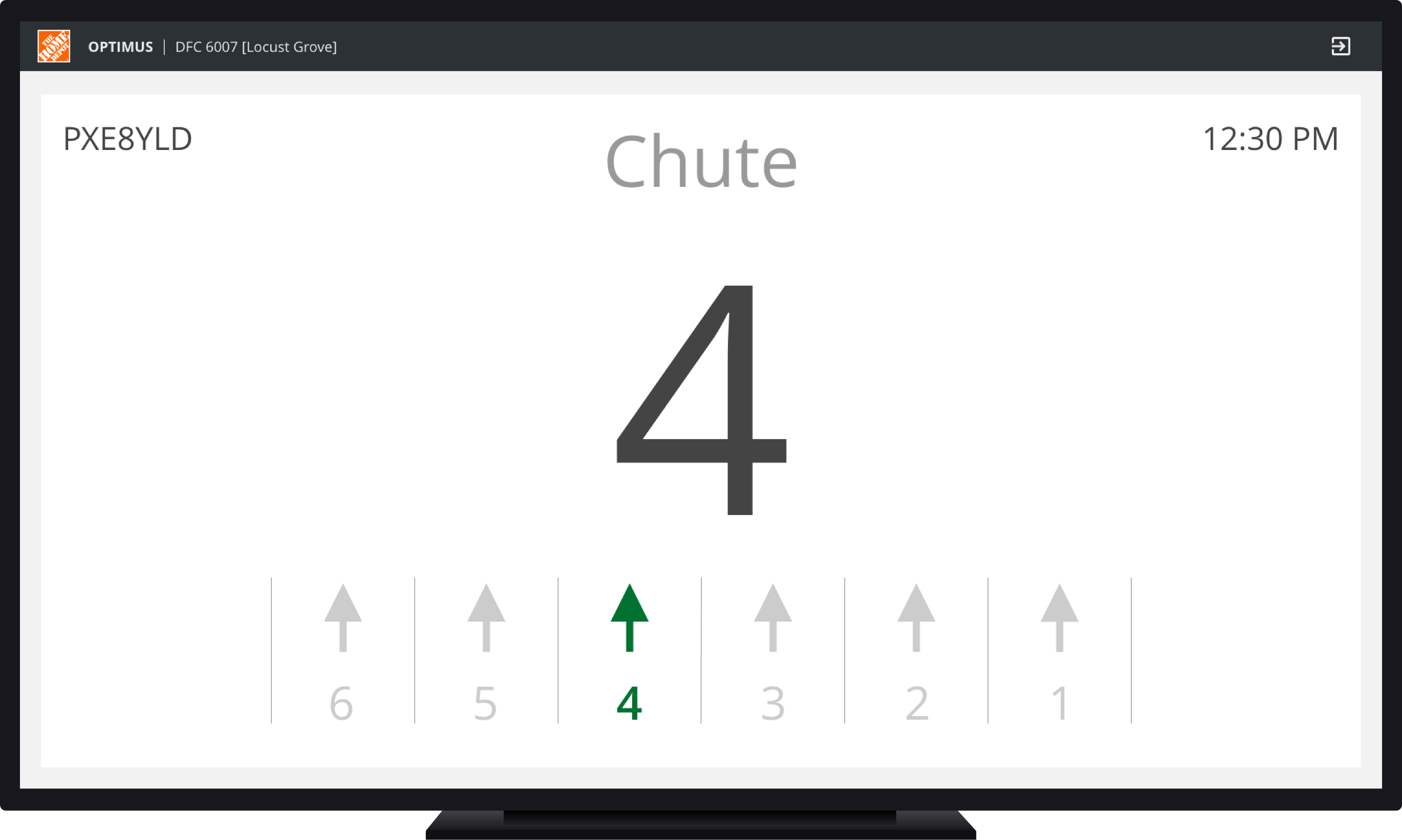 A new process of unloading trailers at The Home Depot's Fulfillment Centers.

Trailers were being unloaded manually by the inbound associates. On an average it took 2-3 days to unload an 18,000 item trailer. This caused delays in inventory replenishment within the fulfillment center and as a result, items were not quickly available for customers to shop.

Due to manual unloading, the associates were getting tired quickly which also resulted in further increase in trailer unloading time and impacted their productivity.

How might we enable the Inbound Receiving Associates to efficiently sort the items being unloaded from a trailer and the Inbound Leaders to configure and manage the Simple Sort system?

The goal of the new trailer unloading process was:

To overcome the issue, the Operations Engineering team decided to implement a mechanized unloading process called Simple Sort. My team was tasked with designing and building software that would assist the floor associates while they worked on the Simple Sort system. 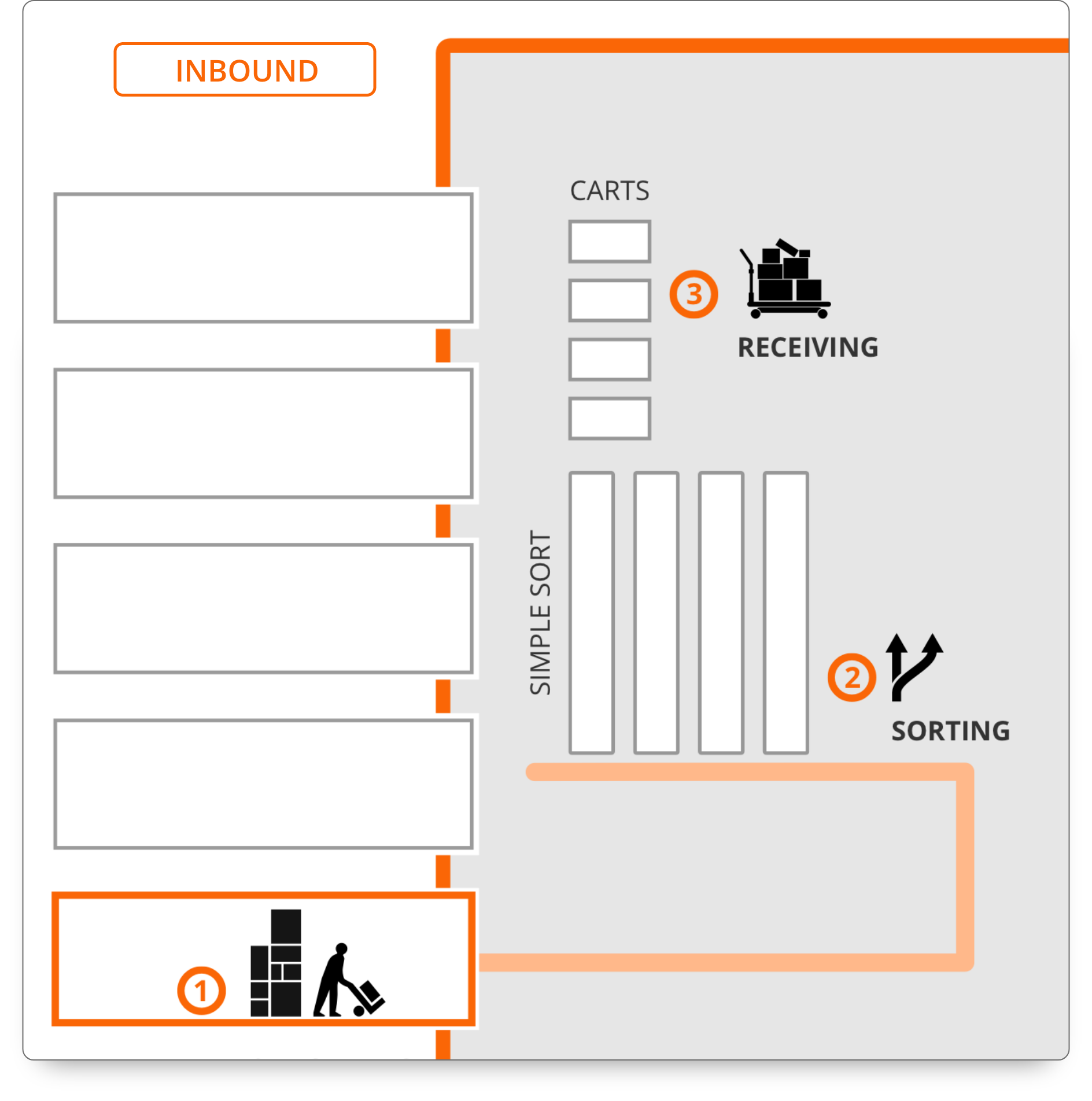 The new Simple Sort system involves a mechanized conveyor system to quickly unload and sort the items coming out of a trailer.

We believe, by implementing a mechanized sorting system to unload and sort items, the associates will be able to unload the trailers faster. We will know this to be true when we see trailers being unloaded in under a day and a reduction in sorting bottlenecks.

To understand what was causing the delays and the impact of the problem, we visited a fulfillment center to learn more about the process.

Some of the key findings from our research were:

Unloading the trailers was a time-consuming manual process. On an average, it was taking around 2-3 days for a fully-loaded trailer to be unloaded.

Sorting was a time-consuming effort since the receivers had to manually check every item/pallet causing sorting bottlenecks.

As a result of sorting bottlenecks, the items were not available for the picking associates to pick despite being available within the building for customers to shop.

When items coming out of the trailers had issues, it would slow down the unloading process causing further delays.

With a good understanding of the problem and the users' needs, we started thinking about ways to address those needs by whiteboarding the user-journey and flow within the app. The session involved the developers, PM, business owner while I was the facilitator.

How might we help the associates sort the items as they're being unloaded from the trailers?

How might we allow the Inbound Leaders to configure and manage the Simple Sort system? 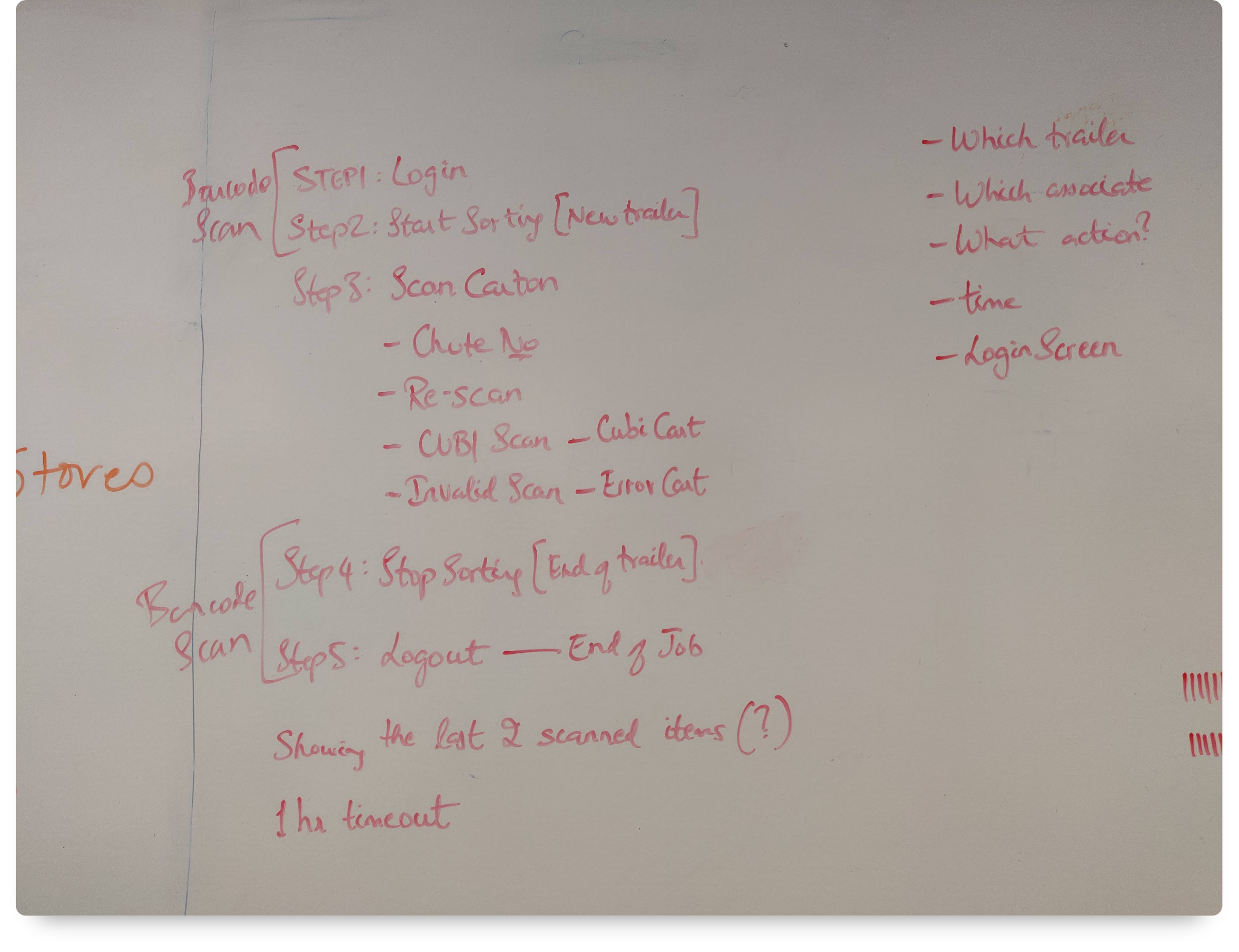 Defining the user flow for the new unloading process. 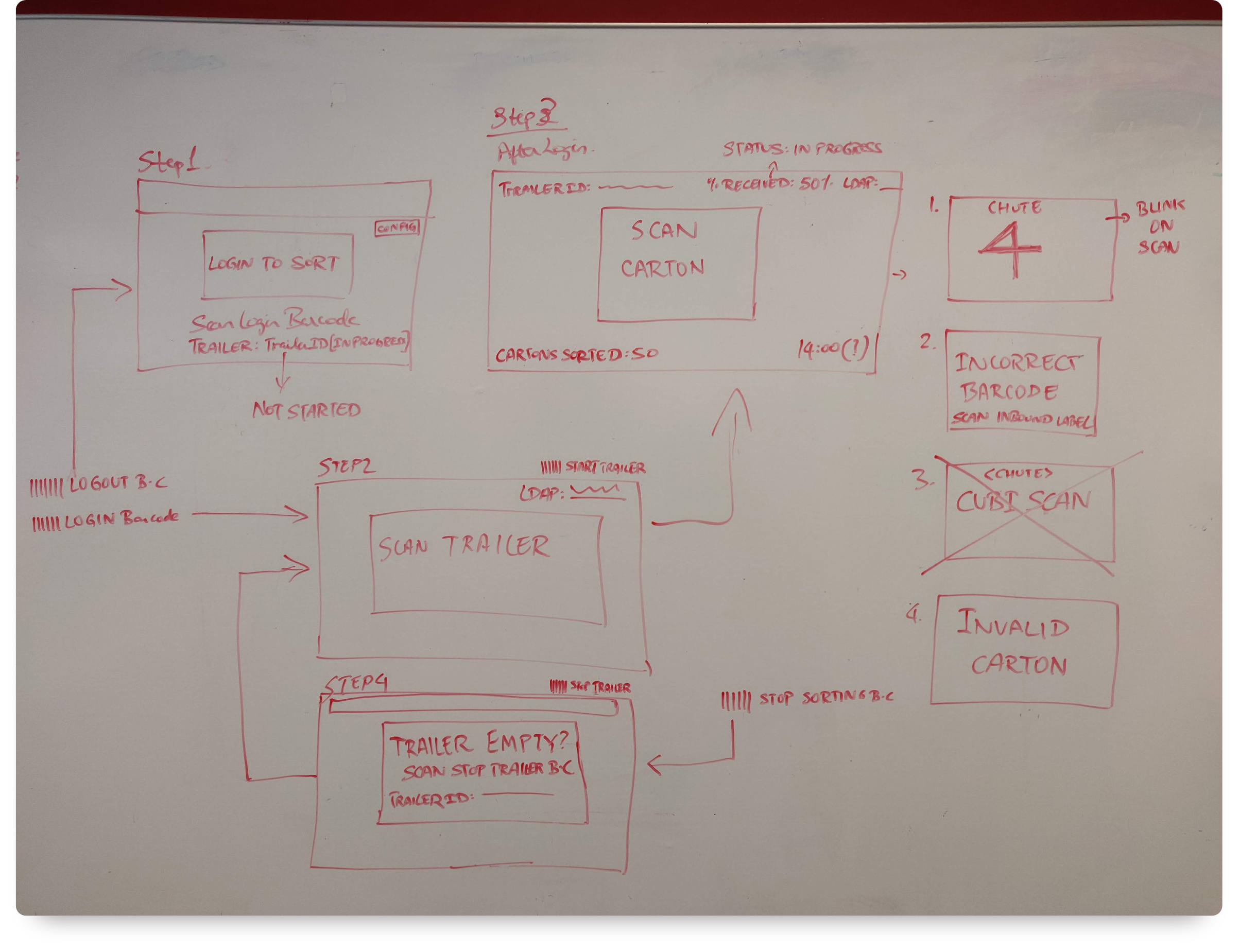 Brainstorming the user journey through the app. 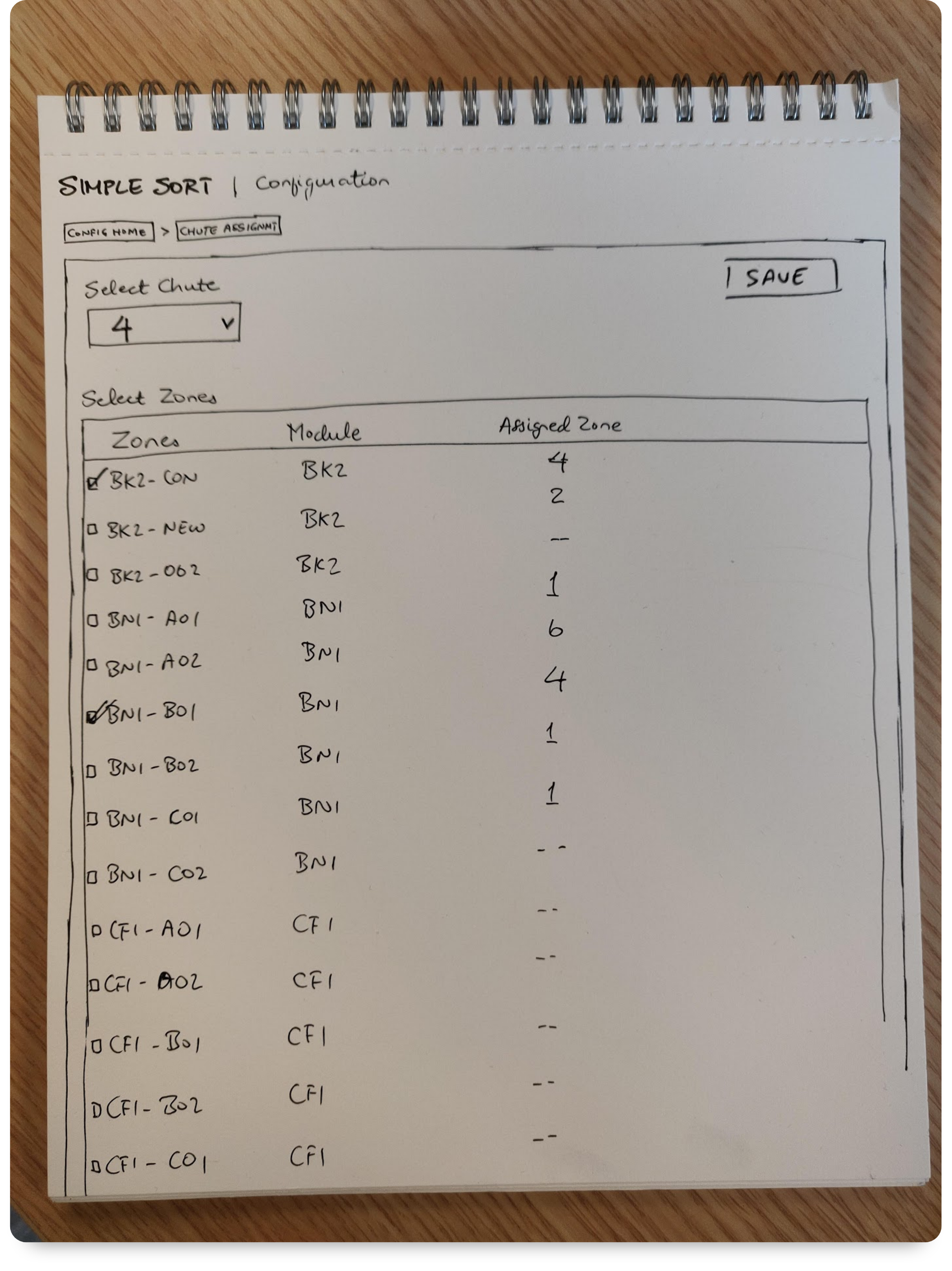 From the brainstorming, we hypothesized that the Receiving associates would need a wall-mounted display that tells them how to sort the items as their get unloaded and a desktop dashboard for the Inbound Leaders to configure and manage the Simple Sort system.

The screen of the first version of the prototype that was used for the usability studies.

Once we had our solution hypothesis, we put the prototypes in front of the users to validate our assumptions and hypothesis.

Since the mechanized portion of the Simple Sort was not live, we had to do a wizard-of-oz usability testing. My team and I pretended to be the simple sort system and as the associates scanned the dummy boxes, we were moving the boxes and changing information on the screen. It was challenging to keep the biases to a minimum and get the most accurate feedback from the associates, but also fun. 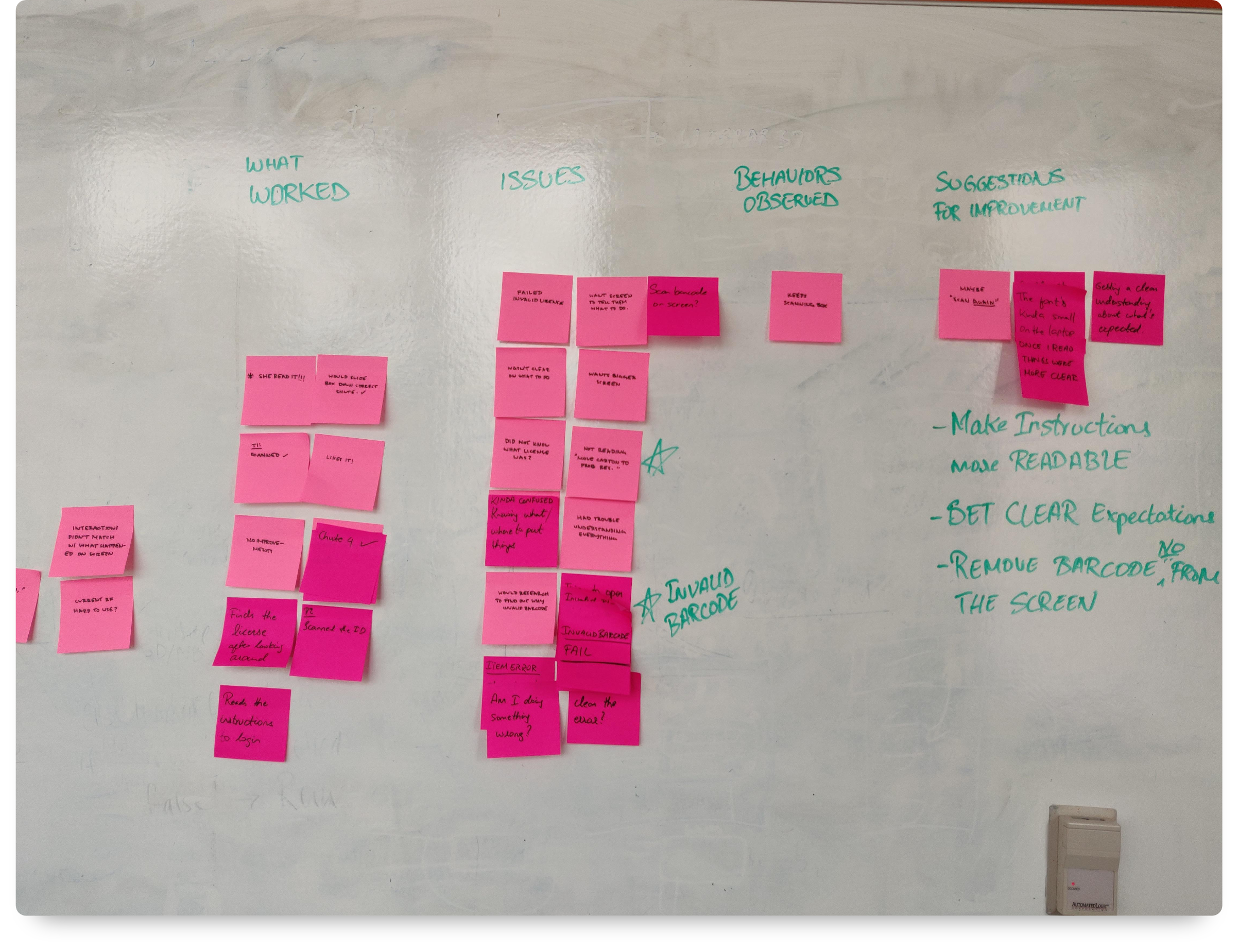 Findings from the usability study. 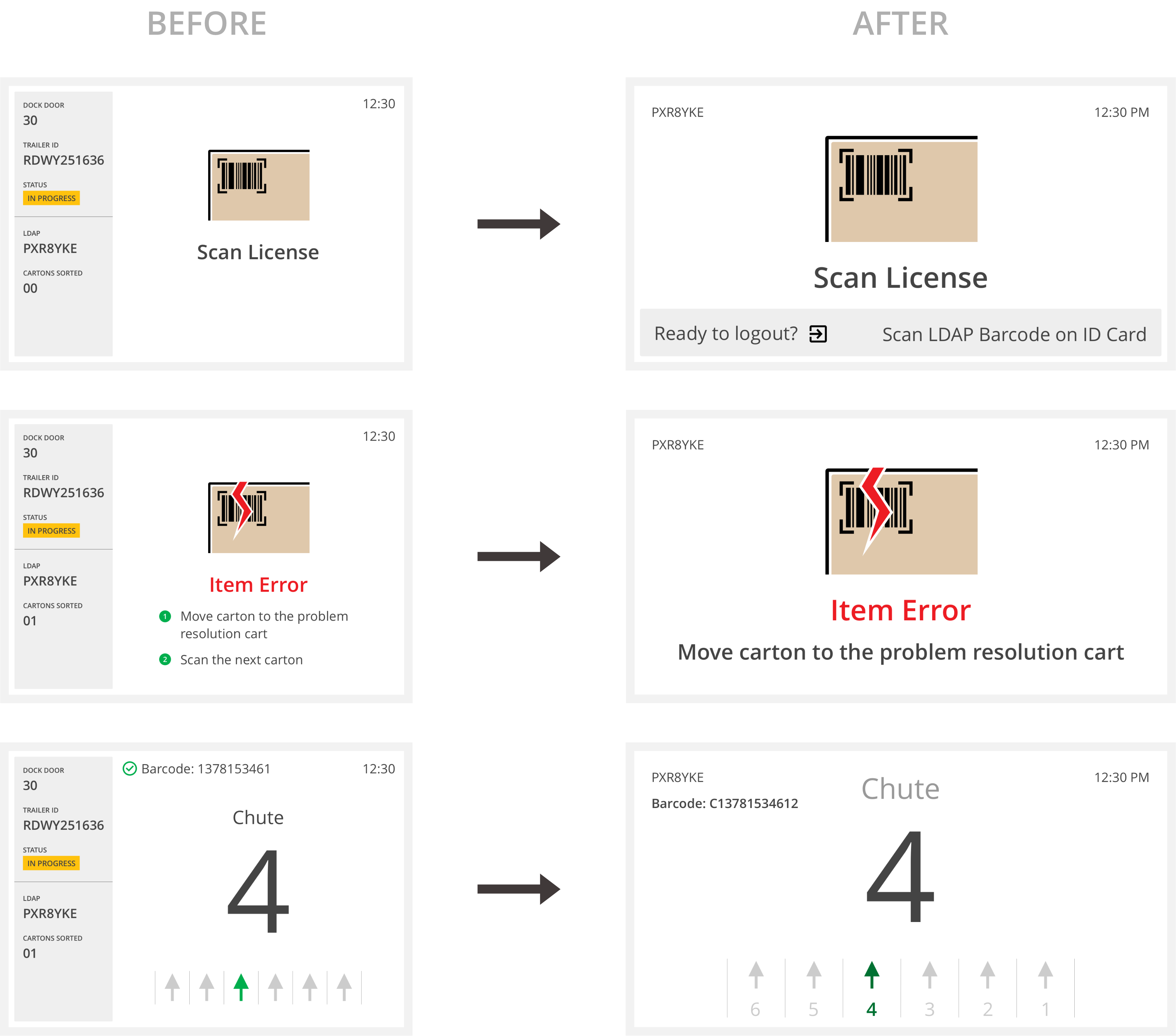 Iterations made based on the usability learnings

The learnings from the usability studies helped inform the final version of the apps. This was also the first time an app of this scale was designed for large screens in the Fulfillment Centers. 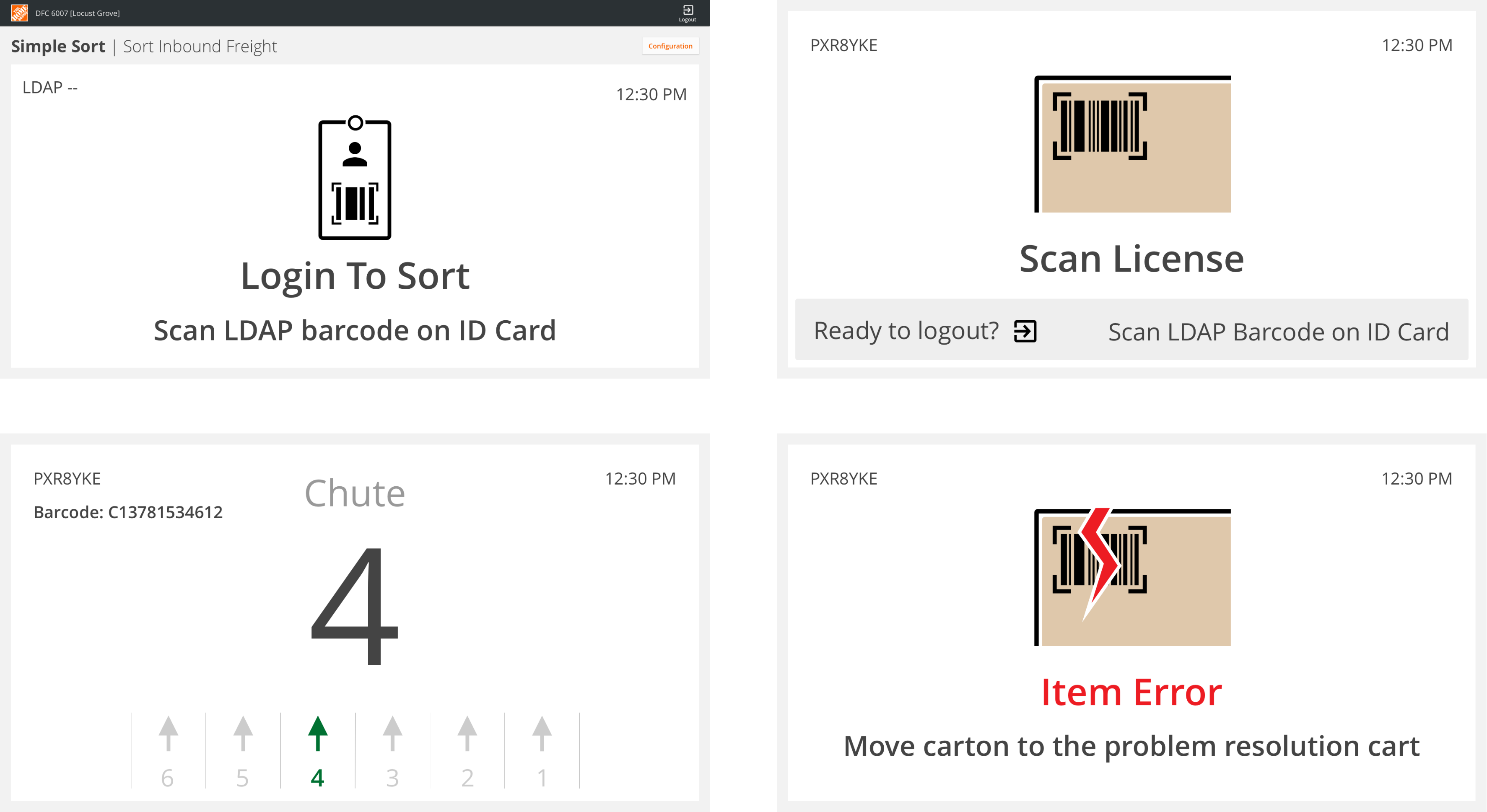 The final design of the Simple Sort App.

The final design of the Simple Sort Config App. 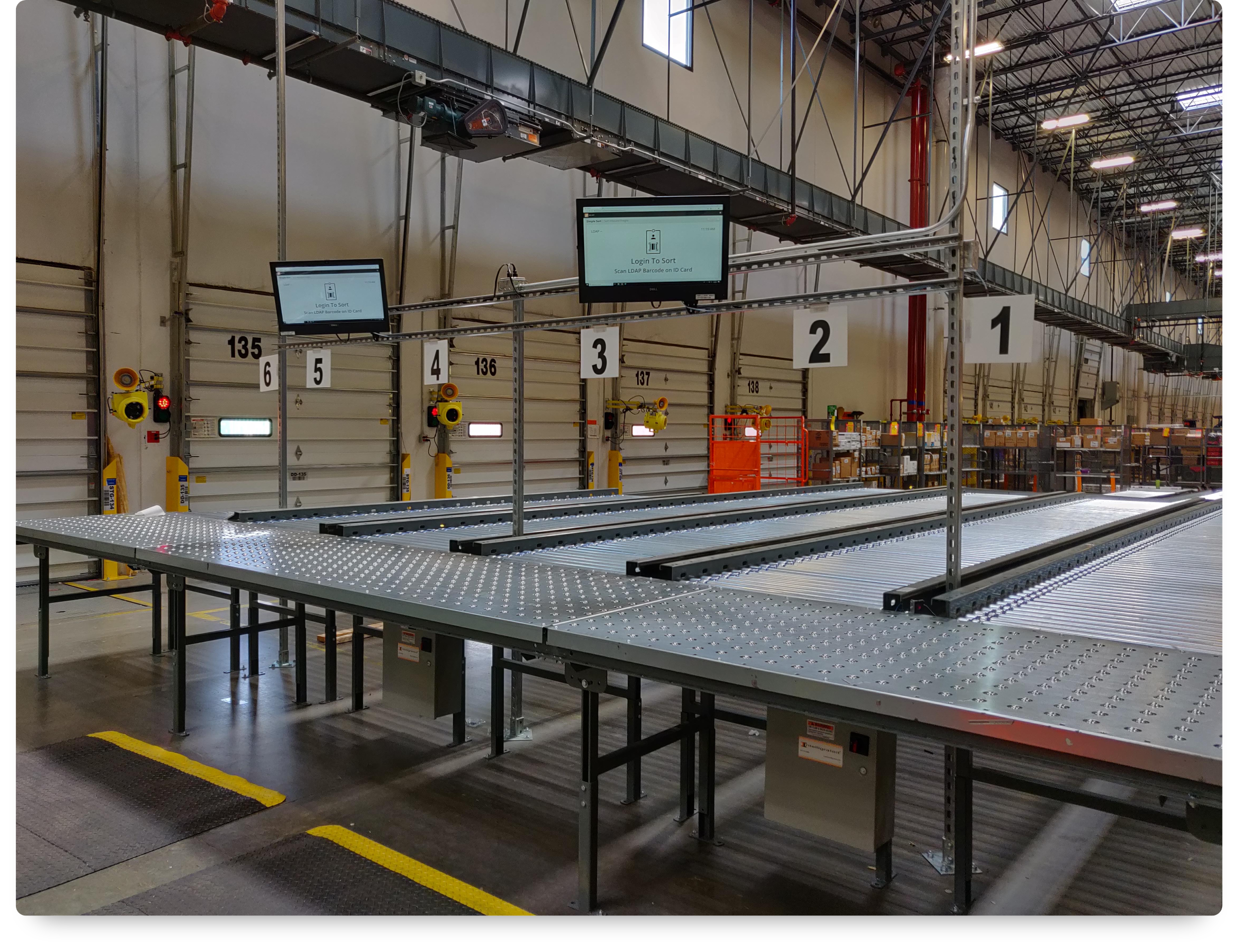 The app deployed in the Fulfillment Centers.

⇨  Trailer unloading time was significantly reduced. Trailers are now being unloaded within a day.
⇨  There are no sorting bottlenecks since the items were pre-sorted based on their location which made the job of putting them away easier and faster. 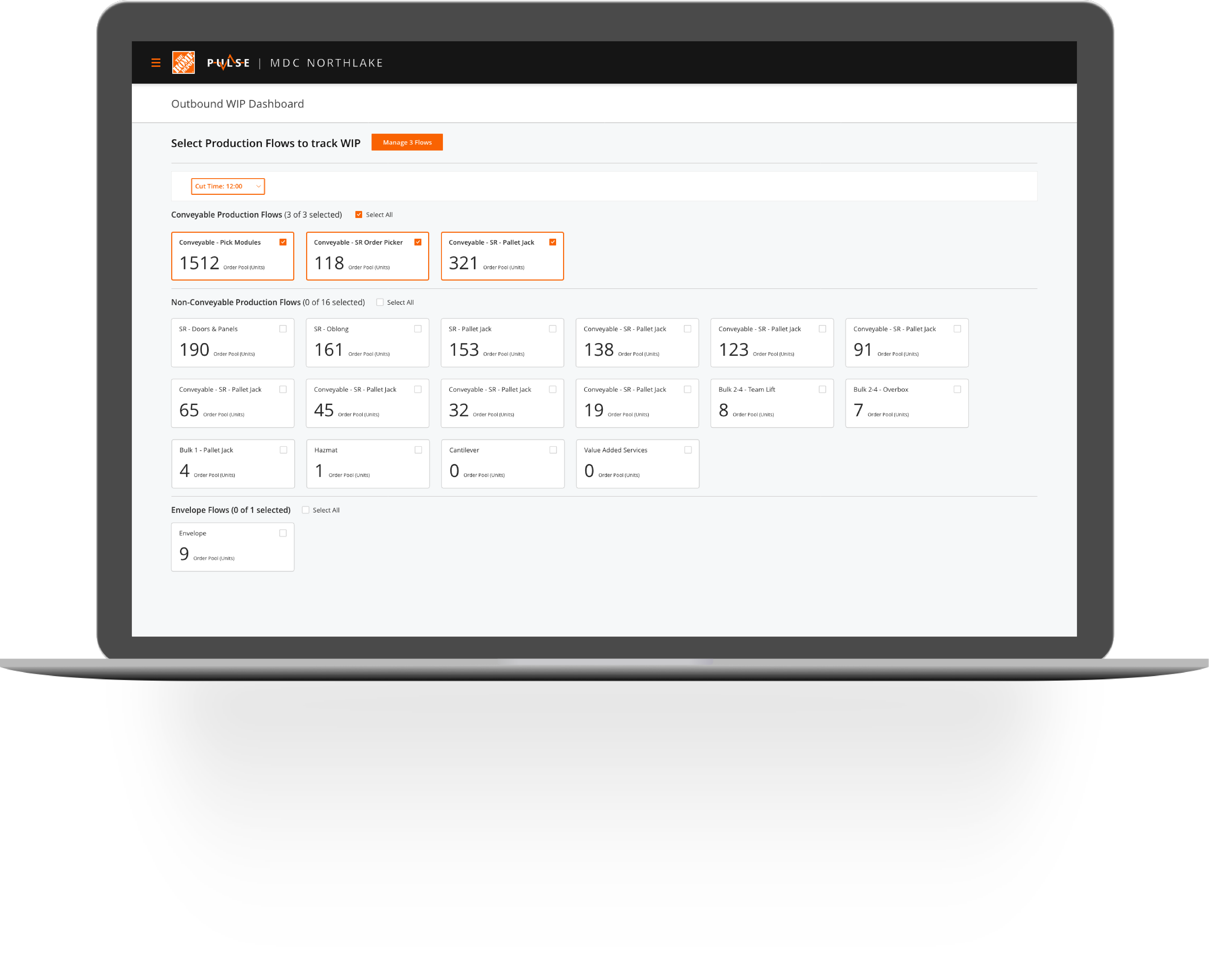 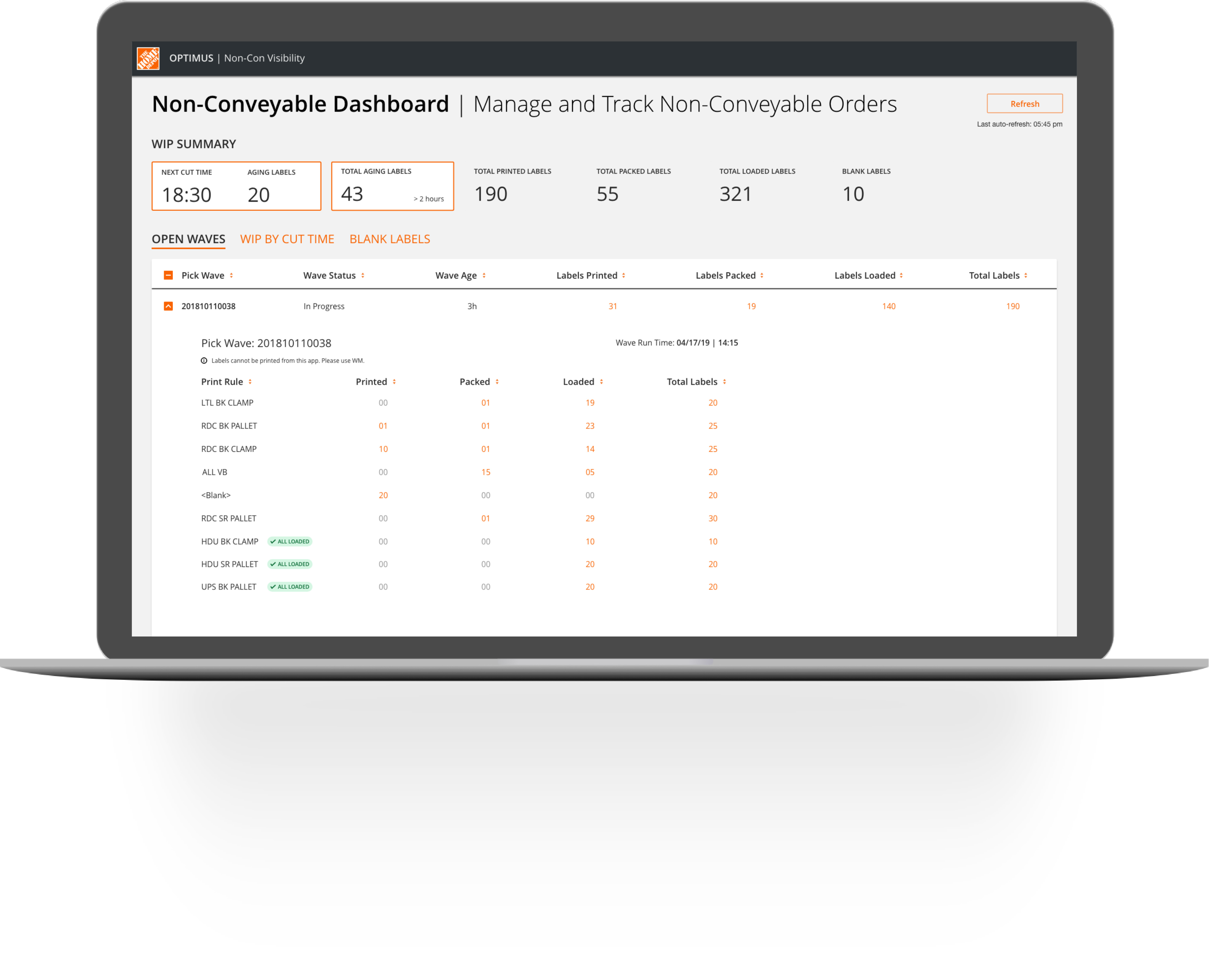